Israel is driving the world to catastrophe, not only because of the racist ideology on which it was founded, but also because its government, along with its supporters (also known as Jewish neocons and the Israeli Lobby AIPAC), will stop at nothing – including war and terrorism – to prop up a country of impostors, who falsely claim to be Hebrews or God’s Chosen People.

AIPAC is Israel’s bulldog in Washington, D.C. Its job is to bribe American politicians and keep them in line (Trump included), while doing the bidding of a foreign power.

It’s squeezing over $5 Billion of foreign aid a year out of America’s coffers for Israel to wage war and oppress the Palestinians, as well as  involving the US in countless conflicts throughout the world, Iraq, Syria, Libya, Iran and Ukraine, in order to strengthen Israel and Israeli/Jewish interests and plans.

Conflicts that have so far resulted in over 5 Million refugees and 3 Million dead, including Christians, and drained trillions upon trillions from the US treasury. See How the Ashkenazi Jews conquered the West. 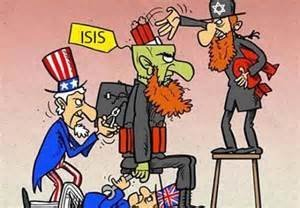 All these flashpoints helped sprout and solidify many terrorist groups, such as ISIS or ISIL or IS and Al Qaeda, directly supported by Zionists – no wonder they never attack Israel.

“[Israel is] double-dealing with ISIS,” explained Dr. Steve Pieczenik, former US Assistant Secretary of State. “For as long as I have known the Israeli security apparatus — part fantasy/part braggadocio — they have always been in partnership with a host of terrorist groups from the very day that these groups were even conceived.”

That’s because only Israel benefits from so-called “Islamic Terrorism” (i.e., Israeli false flag terrorism blamed on Muslims). With every despicable act of false flag terror, Zionist Jews can go on stealing more Arab lands, as well as deflecting the world’s attention from their war crimes in Gaza and their Apartheid regime.

In turn, this makes oppressing the Palestinians justifiable – especially as unrest is growing in the occupied territories. It doesn’t hurt either that every so-called “Islamic Terrorist Act” causes the West to clam up about the comatose peace process that the Israelis refuse to see through.

In the end, this has given us, what in the parlance of the Washington Establishment is known as, the War on Terror, with all its frightful garnishes of loss of privacy, loss of civil liberties, police state, endless war, war casualties, fear replacing faith, hate replacing love, countries lying in ruins, unlimited defense spending that leads to budget deficit, hate around the world, etc.

All because Zionist Jews, pretending to be Hebrews and whose ancestors never lived neither East nor West of the Jordan, wanted to steal Palestine in order to resurrect the Old Covenant while spitting on the spirit of the New.

Given its racist Zionist ideology, Modern-day Israel is a cancer on the earth. Unfortunately, as long as it exists in its current form and continues to manipulate the US Government, there will never be peace in the Middle East nor an end to the World War on Terror.