Trump, the first US President with two Jewish children, beholden to the money power of the US establishment (i.e., Jewish money) that supported his presidential bid (or bought the presidency for him), is making the Israeli dream of stealing Jerusalem and the whole of Palestine a reality; especially since he owes Jewish investment banks hundreds of millions of dollars, which can be easily written off the books if certain conditions are met.

“I have determined that it is time to officially recognize Jerusalem as the capital of Israel,” Trump said.

In one fell swoop, Donald Trump overturned decades of international consensus and laws. He also ignored recorded history: Jerusalem was NEVER the capital of even ancient Israel. 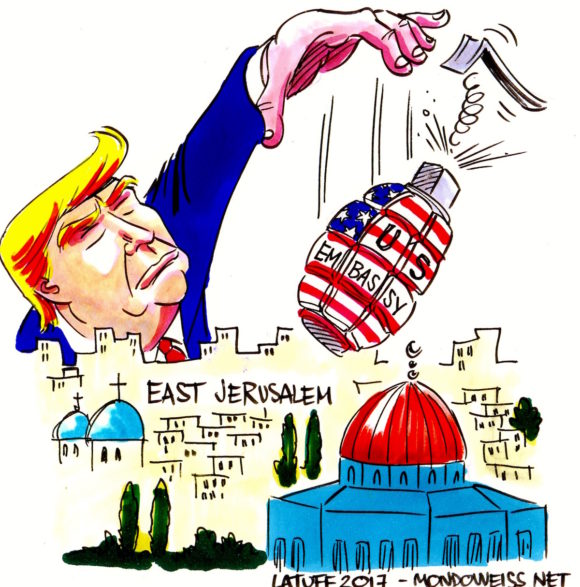 As if that was not enough, Trump tweeted the following: “After 52 years it is time for the United States to fully recognize Israel’s Sovereignty over the Golan Heights.”

The Golan Heights are part of Syria, and were illegally annexed by Apartheid Israel in 1967. The United Nations passed Resolution 242, which called on Israel to return the land to Syria; this was later followed by Resolution 497, which recognizes Syria’s sovereignty over the Golan Heights.

Worse still, Trump shredded the JCPOA or the Iran Nuclear Deal just to please the Fake Hebrews in Apartheid Israel. It was an international agreement with not only Iran but with the world that took 5 years to negotiate, which was dismantled on the evil whim of a war criminal.

“We convinced the U.S. president [to exit the deal], and I had to stand up against the whole world and come out against this agreement,” Netanyahu told fellow conservative Likud party members.

And just like a slave who quickly responds to his master, Trump told an audience at the American Israel Public Affairs Committee annual conference that his “number one priority is to dismantle the disastrous deal with Iran.”

“Unfortunately the role of Washington as Israel’s obedient poodle has our once great country moving in the wrong direction,” explains Philip Giraldi, former CIA officer. “This has all been brought about by Jewish Power and it is time to wake up to that fact and address it squarely.”

Furthermore, Trump constantly and nonchalantly overlooks the fact that Israel today is an inhumane, apartheid country that uses its carte blanche from the US to do as it pleases in the Middle East. It oppresses the Palestinians, treats them like caged animals, and spreads chaos in the region regardless of how it affects the peace of the world.

“When a young Palestinian nurse is deliberately targeted and killed while treating a wounded man, it hardly appears in the U.S. media,” continues Giraldi. “Arab teenagers are shot in the back while running away from Israeli gunmen while a young woman is sentenced to prison for slapping an Israeli soldier who had just shot her cousin and was invading her home. Heavily armed Israeli settlers run amok on the West Bank, beating and killing Arabs and destroying their livelihoods. That is what Israel and its Prime Minister Benjamin Netanyahu are all about.

“It does not take a genius to figure out that the United States is deeply involved in a series of seemingly endless wars pitting it against predominantly Muslim nations even though Washington has no vital interests at stake in places like Syria, Libya and Iraq. Who is driving the process and benefiting? Israel is clearly the intended beneficiary of a coordinated effort mounted by more than 600 Jewish organizations in the U.S. that have at least as part of their programs the promotion and protection of Israel.

“If America goes to war with Iran, as is increasingly likely, it will be all about Israel and it will be arranged by the political and financial services Washington-Wall Street axis, make no mistake.”

To stir up the hornet’s nest, Trump assassinated the top Iranian Commander Qasem Soleimani in Baghdad. But why kill a man who was the death knell of terrorists in the Middle East? Because ISIS and AlQaeda and all other terrorist groups are all creations of Apartheid Israel, tools to reshape the Middle East in order to create Greater Israel and establish the racist Jewish state as a regional imperial power.

The reason Trump (and every other US President and politician) bows down to the Jews is because the Jews control the Federal Reserve, the real center of power in the United States or the money power of the establishment (i.e., Jewish money). In turn, the Fed wags every other financial institution in America, and consequently ends up being the root cause of all of America’s economic ills.

Not even Trump, who supposedly wants to “make America great again,” dares mention the need to dismantle the Fed. Worse, he drools every time he talks about Apartheid Israel, not unlike every other American politician.

The anti-Christ spirit of hate thy neighbor, which revs up the engine of the state of Israel and that of its Prime Minister, seems to fire up Trump’s motor as well with his loathing of immigrants, especially of his Mexican neighbors. He and Netanyahu are two peas in a pod — both arrogant, haughty, and supercilious narcissists.

“Pride goes before destruction, a haughty spirit before a fall.” Proverbs 16:18