Modern Jews – the Ashkenazim, Sephardim, Samaritans, Europeans, Africans, etc. – are not of the seed of Jacob/Israel, thus not of the Semitic lineage of the 12 Hebrew tribes with whom God had the Old Covenant. They are just converts to Judaism/Pharisaism, and therefore neither the Chosen People nor the descendants of Abraham – especially since all Hebrews are irrevocably dead.

In other words, Zionist Jews, who claim that Palestine belongs to them, are simply barefaced impostors and liars pretending to be Hebrews in order to steal the land. They can’t possibly contend that Palestine, which they have stolen under biblical pretense, is their Abrahamic inheritance.

Consequently, Palestine does not belong to converted Jews. Not one inch of it.

Palestine was not a land without a people for a people without a land, and it was not a state of sand, malaria, and flies as the Zionist Jews would have us believe. It was a fully functioning country with a sizable Arab population.

But all of that changed when non-Semitic, non-Hebraic, Zionist Ashkenazi Jews – who lost their homeland Khazaria and were in search of a new land – flooded into Palestine before, during, and after World War 2.

Once on the ground, they created many terrorist groups such as the Irgun, the Stern gang, and Haganah. They terrorized the Palestinian population, killed thousands upon thousands, and forced hundreds of thousands out of their homes and into neighboring Arab countries.

“We will expel the Arabs and take their place. In each attack a decisive blow should be struck resulting in the destruction of homes and the expulsion of the population,” explained fake-Hebrew Ashkenazi David Ben-Gurion, a Prime Thief of Israel (1949-54, 1955-63), in a letter to his son (1937).

As a result, the Ashkenazim stole Palestine in 1948 and renamed it Israel in order to reinvent themselves as Hebrews and hoodwink gullible Christians in the West. See How the Ashkenazi Jews Conquered the West.

However, countless Palestinians were massacred, with a great many dispossessed of their land. The majority of those who still inhabit the country are segregated, while millions more are currently refugees in neighboring Arab countries, waiting to go back to their stolen homes.

By setting in motion such a course of action, the Zionist Jews, pretending to be the Hebrews of the Old Covenant, hypocritically broke half of said Covenant’s commandments.

“You shall not misuse the name of the Lord your God, for the Lord will not hold anyone guiltless who misuses his name.” Exodus 20: 7

“You shall not give false testimony against your neighbor.” Exodus 20:16

Since then there has not been peace in the Middle East, and there never will be as long as Israel continues to exist in its current configuration and gets away with manipulating the US Government.

And ironically, Judea and Samaria of the Bible (i.e., the Kingdoms of Judah and Israel) are today mostly inside the West Bank of Palestine (rightly called Judea and Samaria even by thieving Zionists – West Bank map on your right) and not inside Modern Israel. 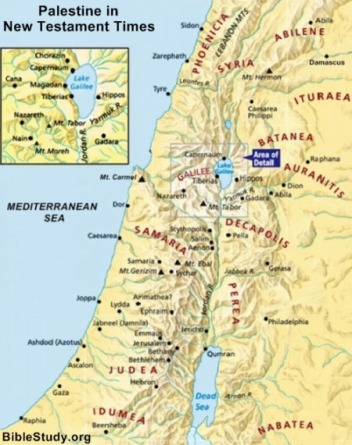 HOW STEALING PALESTINE AFFECTS THE WORLD

In stealing Palestine, the Zionists didn’t just hurt the Palestinian people, they scarred the world as well, are scarring it now, and will probably continue to do so until the world puts an end to it.

World War 1: Britain was losing the war against Germany. The Zionists stepped in and bribed President Wilson to get the US into the war to help them. In return, the Jews asked the British Empire to deed them Palestine to create Israel. Their wish was granted in the form of the Balfour Declaration of 1917, which cost the world 18 million dead.

During that same period, the Jewish Bolsheviks, who took over the Russian government in the 1910s, killed 66 million Christians, including 200,000 members of the Christian clergy, and destroyed 40,000 churches.

World War 2: The Zionists fomented that war (just like they’re doing today with Iran and other countries in the Middle East), so that European Jews could feel threatened. The deception worked as European Jews fled in droves to Palestine and took over the homes of Palestinians, who were evicted at gunpoint and then either massacred or driven out of their land into neighboring Arab countries. With enough Jews on the ground, Israel was created in 1948 at a cost of 80 million dead.

World War On Terror: Jewish neocons, in cahoots with their bought-and-paid-for politicians in the US government, perpetrated their act of terrorism on 9/11. Then they conveniently blamed it on Muslims so as to obtain a green light to destroy the Middle East using the armies of the US and NATO and the terrorist groups they finance, with the ultimate view to creating Greater Israel. So far, the death toll is 27 million, including Christians.

World War 3: With Russia protecting Syria and Iran from Israel’s Machiavellian design, will the Zionists succeed in bringing the world once again to the brink of disaster to create Greater Israel? If they do, will it instead bring about their downfall?

Apartheid Israel is indeed a scourge. A cancer that needs to be dealt with.

“You will destroy them that speak lies: Jehovah abhors blood-thirsty and deceitful men.” Psalm 5:6

If one truly believes the Jewish-dominated media, their fake news, and their constant barrage of “Holocaust” movies, one genuinely thinks that there’s only one group of people that everyone on earth hates: Jews. That’s how effective the brainwashing has been.

However, when one wakes up from the media’s induced stupor, one realizes that Zionist Jews are themselves the victimizers of not only the Arab Palestinians but of the world as well. As befitting the deceivers that they are, they camouflage themselves as victims.

Unfortunately for them, the world’s consciousness is being stirred, and everyone will soon realize who they really are: impostors, liars, shameless thieves, and blood-thirsty barbarians.

Nevertheless, the greatest SHAME is the fact that many “Christians” (including the leaders of the “Christian” media who sold out Jesus and His Love-Thy-Neighbor command to Israel for 30 pieces of Jewish silver) and the great western powers justify Israel at every turn.

“He who justifies the wicked and he who condemns the righteous are both alike an abomination to the Lord.” Proverbs 17: 15

Appeal: Every conscientious individual should implement a personal boycott of Israel and everything made there.

Top Of The Chart